I am now resigned to the fact that sailing in Scotland in 2017 has gone down the toilet with the sale of my last ever Centaur.

It was the first time in a life time of boat owning that I have sold a boat I really wanted to keep. The plan was to use it for the outer Hebrides, St Kilda, Colonsay, Islay, Jura and around the outside of Ireland.I knew I needed a boat with a completely reliable engine - Lily M was the boat for that job.

Last year I sailed through the winter at Mylor and then took the boat with two friends to Skye where I based myself in Plockton and ranged around the North West for the summer. and most of the winter. It was a pricey year afloat.

Last year the taps brought in £5K - I spent £6.6 K on diesel for boat and car, car servicing and moorings and pontoons. I spent three months on a mooring to save money.

Actually lads that was bloody dangerous - being on a mooring where no-one was about and arriving and departing at stupid hours either before or after a 14 hour drive was pretty damn dangerous. I had two near misses when no-one would be about to save me. I had a life jacket on but one was bloody frightening. Old sailors die in dinghies not at sea.

this was the dinghy laden 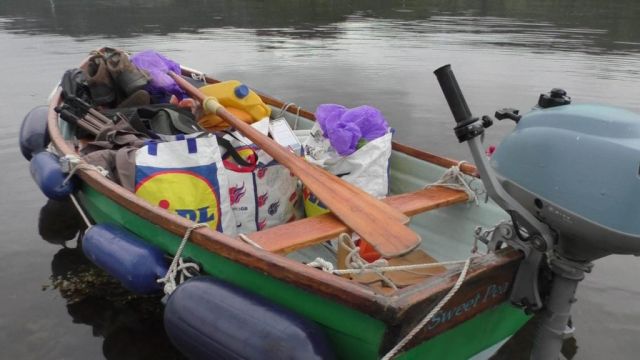 and this was the mooring during one of the frequent storms.

bloody dangerous. KTL  is great - but not worth dying for

Scotland is both the roughest and  coldest place to sail in Britain and also the most beautiful.  You and the boat need to be well prepared and in good condition if you are to get the best out of these amazing year round sailing grounds.

Those winter skies are just unbelievable. The half winter I had up there was glorious. 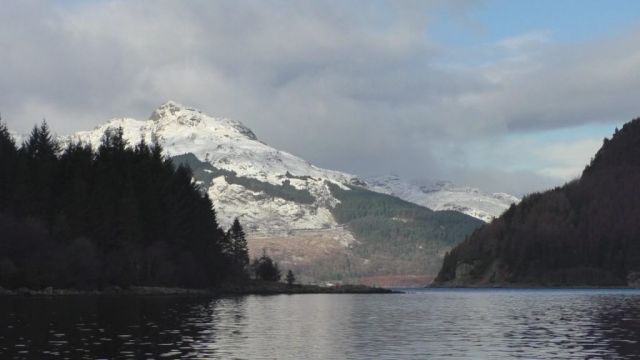 I am desperate to get back to scotland while I am still fit and can hold a camera steady- who knows what will happen to my health.

So far so good and no worries. I pass my tests - but you start to count the years. The fit years.

I am hoping to film these beautiful wild places while I am still fit and not a danger to myself or those around me.

You guys know I love to sail in new places - that is what does it for me. I sailed on an inland lake for a few years - drove me bloody bonkers. Sailing Katie L up and down the deben will be fine but I will be bored to death by mid may.

I have enough material in the can for 10 more films  about the journey down the West Coast of Scotland. They will be a fairly cohesive narrative down the left  hand side of this wonderfully crinkly country. In my terms nothing more than a snapshot of a place - hardly any islands for starters.

I have missed much much more than I ever saw.

I want to go back, I want to make those films, I want to ride those tides, I want to film those beaches.I want to tell you blokes what it is like.

To do a good job of telling you what it is like to go out sailing there in every month of the year but I cannot make films on thin air and the good will of freeloaders who have devoted many, many hours of their precious time to watching and enjoying the films - but without, as yet,  chipping in.

My films are the best shot, most thoughtful, informative, witty sailing films anywhere on the web. If KTL falls by the wayside the only well produced sailing series will be the bikini shows featuring pulchitudinous  girls sailing expensive multi bathroomed plastic yachts around hot places  waving their delectable tushes in the general direction of their semi-tumescent go pro wielding boyfriends

To watch the bikini babes is just too embarrasing for words when wives are in the room. My films are suitable for family viewing.

We pay for other digital things - box sets,  netflix, maybe even for cable or skye - itunes or spotify.  You pay for the entertainment not for the costs involved in the top gear blokes smashing up perfectly good cars or for the furs worn in game of thrones series 4.

Please gentlemen, I ask you not to pay me money because you think it will help some jowly old Englishman to take a future boat to a future place - or for the modest achievement of an old bloke sailing a well found boat in a tough place .

Forget the costs involved of making the films.  They are of as little importance as the price of Sir Micks bus ticket to a Rolling Stones concert at the Albert hall or the value of the paint applied by Picasso to a piece of canvas. The value to the viewer is what counts.

If you watched a film and then thought about it the next morning then maybe tap me some cash in appreciation for the fun you had watching it.

If, on the other hand,  you thought it was an utter waste of time and "why the heck did I sit through that drivel"  then pay nothing.

Send me an email saying why it was a worthless piece of crud.

if however,  it filled half an hour for you and you now feel more relaxed about more important things such as what the heck  were the Americans thinking when they elected Donald Trump, then that might be worth a couple of bucks and comment via paypal.

If,  on the other hand,  it was bloody brilliant – well  tap me a bit more. – not for the future boat but for the experience you have just shared with me via the lens of my camera on my boat . If you went for a sail with a friend for a day you would not turn up empty handed – you would bring some beer, or a mars bar each.

Since I sold the Centaur the taps have suddenly gone up to a level where if they hold through the next ten films I can re-boot with a Fisher 25 next year. I know it is blocky little  motorsailer but it will keep me warm, dry and safe while sailing in a cold, wet and rough place.

At first I could not make out why the taps had picked up. Whenever anyone sends me money I always send a hand crafted email in return.

One bloke from the States, a builkder of wooden boats by trade sent me $200. I sent an email back asking why.

This is what he said.

“Over the years I have been downloading all your films and I watch them in the morning with my coffee because the news is so horrible. I was mortified when I discovered that you had sold your boat. I thought you would be there forever. I assumed that you did not need any money.

I think that I had rationalised not tapping you anything because, in my head, you were some sort of eccentric English millionaire philanthropist genius amateur film maker who thought that sailing a crap boat to interesting places was cooler than sailing a good one. I realise this was a way of me justifying not giving any money to a friend I had been sailing with for many miles  and over  several years.  When  I heard you had sold the boat I realised that it was partly my fault so I sent the money for the eight DVD sets sitting on my hard drive.”

So the past three Scottish films were on target for 2K each - the last two east coast films hit half that.

If the last ten films (as yet unmade) can also hit £2K each then I can buy a boat and start making sailing films again.

If they don't hit target then it will be just you and the bikini girls.