I thought we were due for yet another day reading our mind improving books when just as suddenly and rather miraculously, half way through a bacon sandwich, the mist rolled away again - in the space of just a few minutes.

This is an amazing climate.

I have been a sailor for half a century and the miracle of that tiny barely perceptible breeze shifting a four tonne shit box still knocks me sideways and fills me with wonder. When she starts to move and the rudder starts to bite you get that frissant of pleasure coming through the tiller, up through your arm and into your soul. A truly glorious experience.

For us sailors of the modern era (if I may be sold bold as to describe myself at 60 as a modern sailor) the sound of departure is a noisy affair as we shout over the roar of the volvo. For thousands of years though departures were quiet affairs – with just the sound of wind, the flap of sail and the distant curlews.

The mussel farms are as thick as thieves in these voes - a sentence I had never expected to utter – but such is this journey. The mussels cling to ropes hanging beneath the baby bath sized buoys sucking silently on salt water hoping to extract the tiniest bits of crud to eat. It takes over a year to grow from a pea sized baby to an adult big enough to be harvested and then without mercy or compassion plunged alive in their home built shells into boiling water.

In nature they cluster together in colonies so hopefully they will not succumb to too many diseases in this intensive form of agriculture. There is no need to feed them but their filter feeding habits mean that they are brilliant at accumulating toxins – one of the reasons I never eat the blighters.

As a cameraman I rather relish the repeating shapes they make.

so it seems as benign a way as you can imagine to exploit this lovely space for profit. Apart from oil and sheep farming the seafood business is all that is available by way of gainful employment on these islands.

That glorious morning we sailed sedately up the six mile stretch of Ronas Voe and out towards the open Atlantic.

The geology continued to be astonishing. These are among the oldest rocks on the surface of the planet. They were formed around three billion years ago deep down below the earths crust where it is all hot and mushy where they formed into rough layers like a pile of wet lasagna 100 miles deep

Then they were forced to the surface by a bubble of molten hot stuff from below being folded and twisted madly as they came up so the fault lines between layers are every which way. At one time these rocks were mighty mountains bigger than the alps.

Shetland is but the stump of a hard place – stuck out in the north Atlantic where it is under the relentlass assault of the ocean rollers driven here by the prevailing westerlies.

Then Shetland bobbed up and down a bit with a million years of ice ages creating the dramatically cliffed deep water voes that are the distinctive feature of this place and which prompted the vikings to decide that this looked and felt like home.

Damn this is so different from the gentle muddy saltmarshes of my native East Anglia.

But what a place for a sea kayaker.

Up here, in shetland, with is crenelated cliffs you can see why they do it.

I too feel the the desire to get in close. I envy the kayakers their youth

as we headed on south the breeze started to freshen and she started to get into the groove.

As the old Centaur clacked and bobbed while self steering her way past these ancient headlands she passed regions of old and new – some the three billion year old Methuselahs – others 500 million year old johnny come lateleys layed down when shetland was a tropical paradise the other side of the equator.

Listen to the names mankind has given to these billion year old formations. To read them out sounds like poetry coming down to us from our forefathers.

Bloody marvelous aren't they. Of course the rocks don't care what we call them. Our existence as humans is but a blip in time to them.

It had been a lovely sail – not a drop of rain – plenty of sun - fekking cold but that was alright. Its mid summer, shetland – what do you expect? A girl in a bikini?

We sailed on south with the strong wind shoving us onwards.

As we came down through st St Magnus Bay and past Muckle Roe we had to motor a bit, but there is nothing wrong with that because we were back close under the old rocks.

such a lot of wondrous stuff to marvel at and put our brief human existence into perspective. In aplace as glorious as this even motoring is a pleasure

– not as good as sailing here though.

Then as we turned the corner between Swarbacks Minn and Busta Voe the waves flattened out and the wind came blasting at us from the east.

That glorious miracle of wind in sail and hull on water took over. We were going against a very modest ebb tide but with the strong wind just ahead of the beam we rolled out the full genoa and with a single reef in the main the old girl started to pick up some real speed.

It was bloody brilliant.

Then she really started to really go at it. She was just flying along 6.5 knots against a quarter of a knot of ebb tide. The tiller started to gently vibrate under Jill's hand.

I have had never before, nor ever since experienced such a thing. The powerful wind, the flat water, the gentle heel meant that those slightly canted toed keels were sucking out all the leeway. The boat was sailing perfectly

I had no idea a centaur could do such a thing.

I am just going to let these shots run for a bit – you will seldom see a centaur going as well as she is here.

Just imagine how a decent boat would be traveling under these conditions.

– the most stripped out basic sailing machines yet designed by man – when on a fast moving windsurfer them you are part of the physics of the machine – you feel the wind through the straining muscles of your upper body and the waves through your legs and feet.

As a former windsurfer I miss the physical perfection of the thing. I have never felt so in touch with speed as when on my old Bic – it beats bikes, horses, and dinghies into a cocked hat. Clearly Jill and I were not he only ones relishing this perfect day for fast sailing. Suddenly our 6.6 knots didn't seem that much at all. Still one the top five sails experienced by this ancient mariner

The boats here are different from our previous shetland harbours – recreation vessels outnumber the working boats by three to one.

There is oil money here – comes from the nearby sullon voe. Loads of dinghies and windsurfers and almost every vessel held down by concrete blocks – even the big ones. This must be a very windy place. Which I guess is why it is home the shetland windsurfing club

But... Brae, Brae – such a dull place ban barely fill but half a day.

I could never live in Brae

– and I don't say that very often about a place so close to the sea.

That night we dined in the award winning chip shop. It was bloody good. It bills itself and the most northerly chip shop in Britain – and therefore I presume the world. Jill ate the local mussels – potentially toxic little blighters - She declared them absolutely delicious and seemed to escape unharmed. I am a pie man myself . I like my meat cooked to buggery.

I got up early the next morning – this far in the north it is light by 2.00 - so while jill buried herself in the forepeak under a pile of sleeping bags trying to pretend that she had a less hyper husband I fired up the engine and chug fuggered out into Busta Voe. Look at that vista opening up. What a treat.

Amazingly the mussel men were up harvesting. It looks like bloody hard work to me.

then the wind arrived. I had thought it would be rather fun to circumnavigate Vementry – shaped like a piece from a jigsaw puzzle, with a seriously narrow gap between it and mainland shetland.

The island was transformed into a massive second world war gun emplacement to keep the pesky jerries at bay.

The attraction for me was the gap – just a few yards wide and only slightly deeper than the keels on the centaur. My heart was pounding as we came up to it. I always like to think that thje only thing between me and the rocks is the occasional sea kayaker.

Take a look at the charts of the route – jolly good fun. All done without a chart plotter.

it was the annual regatta - three yachts and a mobo. In shetland they race with dodgers and spray hood deployed – and why not

We went up through the gap between papa little little and the mainland where the semi redundant plant from the partillay esting fish farm was all over the place – some afloat and some scattered across the pastures. Bloody mess. The a quick whip around Linag and back towards the atlantic

We followed the coast for a few hours – the engine, our two cylinder diesel sipping sven the volvo chuggering away beneath us.

There was only one bit of difficult navigation when we came inside papa stour. We had to do some back bearings on one lot of rocks to avoid another lot. Yet again I wished I had a chart plotter but even at 60 I still love a bit of risk.

Then toward evening the weather started to go a bit tits up and it started raining. The spray hood went up, the camera was put away, Jill went below to cook and I stood out in the rain watching the scenery drift by.

Our planned journey to scalloway was put on hold and we headed for the nearest council pontoons at Skelda – it was too wet for the good camera but I shot this on the little waterpoof one.

Skelda – we were there for three nights and two days. I saw, walked and observed every square inch of the place.

– so I walked and observed every square inch of the place. Between the wandering around I read more bloody mind improving books and listened to round the clock radio scotland with relentless phone ins about politics, independence and European subsidies.

I am sorry about the wet end to this film – but this is real sailing. The next one is about Scalloway, the Pentland firth and loch eribol – some astonishing history, the most frightening life of my life and some brilliant sunshine when we hit the mainland. 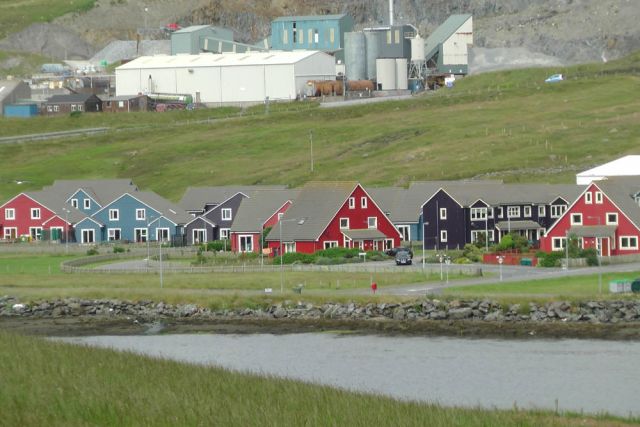 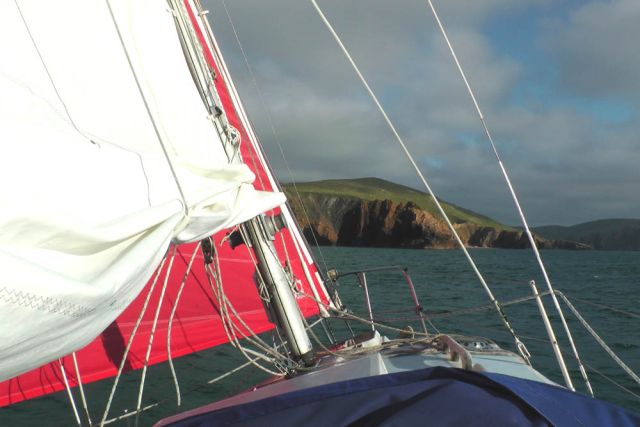 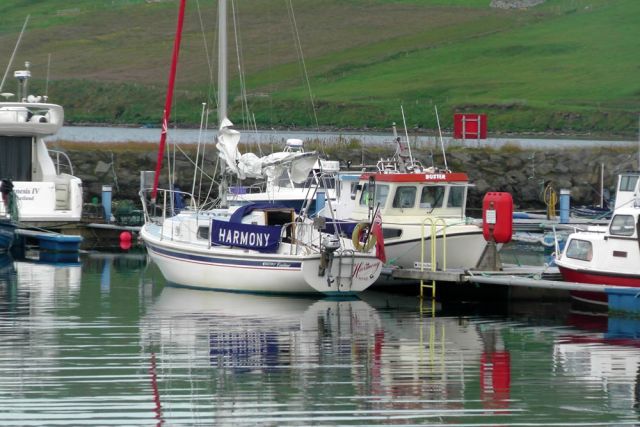 and here is the home studio - blanket on the table, sleeping bag across two stools, cusions - all to absorb stray enchos from the room.

5 Responses to “West Coast of Shetland voice over script”